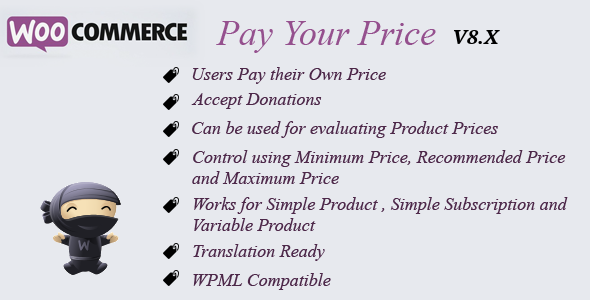 WooCommerce Pay Your Price is a WooCommerce Extension Plugin using which users can name their own price for the products there by giving your users more importance which is likely to get you More Sales. Pay Your Price can be used to Accept Donations using Pay Your Price by setting your price as Minimum Price and the Donation + Minimum Price as Recommended Price, understand what Prices your Products command in the Market etc. You can force users to pay within a range by setting a Minimum and Maximum Price. You can set a Recommended Price which will be set as initial Price in the text box. You can even give the users complete freedom to pay their own price by not setting a Minimum and Maximum Price. Both Minimum and Maximum Prices are optional. Plugin works on Simple Product, Simple Subscription and Variable Product.

For support, feature request or any help, please register and open a support ticket on our site.

Content Egg – all in one plugin for Affiliate, Price Comparison, Deal sites